“When I was a child ladies and gentlemen, I was a dreamer. I read comic books, and I was the hero of the comic book…So every dream that I’ve dreamed has come true a hundred times…” -Elvis

With a release date timed to celebrate the life and legacy of Elvis Presley around the 35th anniversary of his passing on August 16, 2012, the book and app feature for the first time, a number of Elvis’ handwritten personal notes and reflections written in the margins of his personal book collection at Graceland.

The notes reveal rare insights into the inner workings of the legendary music icon, showing his deep spiritual quest and exploration of the mystical. Elvis shared his passion to seek out the deeper mysteries of life commenting, “All I want to know is the truth, to know and experience God. I’m a searcher, that’s what I’m all about…”

In a section called “The Searcher,” readers can zoom in and explore selected pages from Elvis’s books with doodles, words, numerological notes and handwritten phrases with sayings such as:

“God loves you, but he loves you best when you sing”

In another section called “The Legend,” rare photos and memorabilia from the archives at Graceland in Memphis are showcased, including Elvis’ signed boxing gloves from Muhammad Ali; a letter from Douglas Fairbanks inviting Elvis to London to perform for the royalty of England; and sketches of Elvis’ wardrobes by his longtime designer Bill Belew.

Honoring Presley’s love of comic books, each section of the app is interweaved with original artists renditions of Elvis in imagined scenarios as well as short stories and animations by acclaimed graphic novel creators, including Stan Lee (co-creator of the Avengers, the X-Men, the Fantastic Four and Spider-Man).

Stan Lee commented on his participation of the book by saying, “What a thrill it is for me to be included in a book celebrating the life of Elvis Presley. I remember the time I first saw him on TV, when he burst upon the music scene like a blazing comet. I remember his indescribably rich voice, his incredible sense of rhythm, his magnificent range– from rock, to pop, to ballads and hymns. I remember the indescribably powerful impact he had on the youth of the nation– and the world. How lucky we were to have seen and heard him, because there was only one Elvis Presley, whose songs and whose memory will live forever.”

“Elvis Presley transcended every entertainment medium he touched, from music to movies to concerts, and now to graphic novels,” stated Liquid Comics Co-Founder & CEO, Sharad Devarajan. “We are honored to work with some of the most acclaimed creators in graphic fiction to commemorate the King of Rock ‘n’ Roll on the 35th year anniversary of his death.”

Liquid Comics developed Graphic Elvis: The Interactive Experience, with mobile app developer, Pixo Entertainment. The app is now available for download across all iPhone, iPad, iPod Touch and Android enabled devices. A free ‘lite’ version of the app features previews of various sections of the book as well as an animated short and a few pages of Elvis’s notes. The full app can be downloaded for a purchase of $9.99.

In addition to the digital app, Liquid Comics has released an exclusive slipcase, hardcover, 12″ x 12″ record-album sized collector’s book, Graphic Elvis. The book, which is priced at $195 and limited to only 2,500 copies worldwide, is available with limited supplies from major online retailers and at www.GraphicElvis.com. 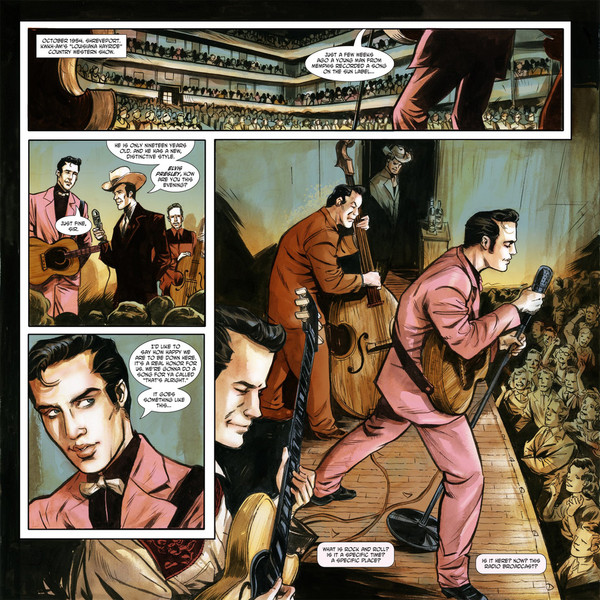